Dzibanche (jih-Bahn-chay), means “writing on wood”. It was so named because of the large wooden lintels that were found in one of the pyramids. Dzibanche was inhabited during the classic Mayan period, and it was the early capital of the Kan dynasty or Snake Dynasty from 5th to the 6th centuries AD. The Kan Dynasty eventually moved to Calakmul. It is situated among tall jungle trees. You can often find howler monkeys calling. The place has the feel of Indiana Jones. With your same ticket you can also see the pyramid at Kinichna which is a couple of kilometers from the ticket booth

From Xcalak, Dzibanche is about a two and half hour drive. From Acocote Eco Inn take the beach road into town, get on the paved road turn right at the stop sign and drive the 61 KM to Mahahual. At the T-intersection, turn right to go to the Pemex Gas Station if you need fuel, otherwise, turn left. Go 51 KM until you hit 307 (This is the road that goes to Cancun). Turn left towards Chetumal. In about 10 KM you will pass through Pedro Santos. This is a great place to pick up some Piña Miel (Honey Pineapple) They usually sell large whole pineapples, 3 for $50 pesos and small ones 5 for $50 pesos. You can also get fresh cut pineapple, fresh squeezed pineapple juice, or honey at the stands that line the road. Once you pass through Pedro Santos. Drive through Bacalar until you see the signs for 187 for Escarcega/Kohunlich. Take the exit to Escarcega. In 38 km you will turn right towards Dzibanche follow the signs. (If you get to the turn to Kohunlich you have gone too far). You will go through the small Mayan village of Morocoy and the road is a bit rough and narrow. So take your time as there are a number of blind curves and the pot holes are deep. You should see signs for Dzibanche and Kinichna. You will find the Ticket booth on the right side of the road. As you are going to be in the jungle bring big hats, sunglasses, water, Ultrathon and deet wipes. The mosquitos can be brutal, especially after a rain storm. Be prepared.

Entering the park, you will probably hear the howler monkeys, long before you see them. They are high up in the canopy of the jungle. Keep an eye out for them (they are the larger dark colored monkeys) as well as the Yucatan Spider Monkey that tend to be more yellowish/tan colored.

The biggest attraction is the temple of the owls. It is the largest structure and is an example of the Peten style of architecture with the two turrets on the top. The temple of the lintels is much smaller but is interesting because it is where Dzibanche got its name. Also, keep an eye out for the monkeys that are in abundance at the site.

UPDATE Jan 14, 2018: Video done by guest of the Inn M Oppenheimer for her AP History Class. Click on the image below to watch. I bet she gets an A! 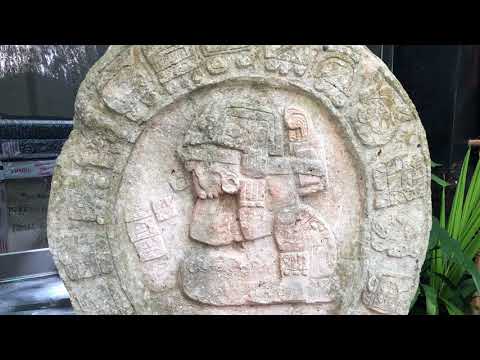